Six great openers to get your prospects’ attention.

Try these. They are some of my favorites.

When I do my live workshops, I don’t spend any time talking about my credentials.

The workshop participants don’t care about my credentials. And, they are right not to care. My credentials won’t make them a cent.

I’ve written many books on how to sponsor distributors. But, even though I wrote those books, not a single workshop participant will earn an extra dollar on their bonus checks. Even if my credentials included a Ph.D. degree in Networking, my credentials don’t mean a thing.

The same principle applies to sponsoring.

What don’t your prospects want to know?

All these things are things you accomplished. Your prospects may not believe they have the same skills or abilities to match your accomplishments.

So, what do your prospects want to know about?

If you’re successful in networking, you should have lots of these real life experiences to share with prospects. Your sponsoring presentations will be easy.

What if you’re not successful in networking, or just starting? What should you do then?

Sounds like a great time to start building your successful experiences. Instead of sponsoring wide, wide, wide, why not concentrate on your best distributor? Put some extra effort into helping your distributor make it to the top.

Once you have your first success story, move on to your next. You’ll soon get the reputation of “somebody who makes people successful.”

That’s a great reputation to own. And, prospects will be attracted to you.

How to avoid long presentations.

Q. What do all of your presentations have in common?

A. They all offer time freedom and money freedom.

You will never have a prospect tell you:

“Oh, I don’t want to join because I don’t want any of that time freedom or money freedom. I think I’d like more debt, less money, and more time at work.”

Because they don’t have the confidence that they can personally achieve time freedom and money freedom with your opportunity. Sure, you can do it, but they don’t think THEY can do it.

Now here is the key. When prospects don’t have the confidence that they have the skills necessary for our opportunity, here is what most people do:

They tell the prospect about three-way calls, nice brochures, perfect videos, fancy meetings, car bonuses, and lots of other nice benefits. But they are missing the point.

The prospect doesn’t think he can do it, so it doesn’t matter how good the benefits are.

Instead of talking about more benefits, concentrate on showing your prospect how SIMPLE it can be to do your business.

What makes you attractive?

It’s easy to see why some sponsors do well and why some struggle.

Prospects don’t want to join a sponsor who criticizes and complains about others. The prospects see this sponsor as having low self-esteem and a low self-image.

Time to go to night school?

What do we know about people who attend night school?

1. They have a job. That is why they are going to school at night.
2. They live locally.
3. They want to get ahead in life.
4. They probably want to earn more money.

Want good local prospects? Maybe you should consider going to night school and be surrounded by great prospects.

“Nobody listens to me” and other pathetic excuses.

I was in Brooklyn, NY for Father’s Day. A man came to the training.

He was from Africa. He only spoke French.

And he was building his business in New York City.

Think about it. How hard would that be?

And yet a person who has lived in America all his life will say:

“I can’t build my business. Nobody listens to me.”

And for the young man from Africa, consider this:

Nobody can listen to him. They don’t understand him.

But, he is building while our American distributor is complaining.

The young man from Africa has chosen to build his business even if circumstances are less than ideal. Our American distributor is looking for someone to solve his problems. He refuses to even try unless someone else makes sure no problems will be in his way.

I see distributors with no cars, distributors building while a war is dividing their country, and distributors who travel thousands of miles to learn the skills to make their dreams come true.

What I wish they’d taught me in high school.

I graduated high school with no money skills. I wish one teacher would have taken the time to give the class a 10-minute lesson on money. That’s all it would take. Managing money to create wealth is not rocket science.

It is not that complicated. Just a few guidelines would have made everything easier. For example:

2. Avoid debt. Debt is rewarding ourselves with things we have not saved for. What sounds better? Working hard and giving our salary to someone else to pay our debt? Or, having other people work hard and give their salary to us … to pay their debt to us?

3. Keep overheads low. A less expensive apartment and car means we have more money to buy stuff that goes up in value.

4. Invest in ourselves. We can double our income for the same amount of hours worked, if we learn good skills.

That’s it. In 10 minutes, teachers could change their students’ lives.

How to take iron-fisted control of your prospects’ minds.

Prospects are reactionary. Most of their decisions are simply reactions to what we say and do.

I walk outside into the parking lot, and I give a stranger $100. Will the stranger react?

Now, imagine that I walk outside into the parking lot, I meet the exact same stranger, but this time I do not give him $100. This time, I give him a punch in the nose.

Will the stranger react?

Of course. He might say something like, “Oh, that was rude. Was my nose in your way?”

If we don’t like the behavior of our prospects, all we have to do is change what we say and do. They will react to us.

That means sponsoring and selling is within our control.

So stop blaming prospects. Instead, let’s learn what we can say and do to get them to say “yes” when we talk to them.

Use presentations for training, not closing.

During a conference training call, I only had 30 minutes to talk, just enough time to irritate the listeners by telling them that their presentations were useless.

They protested by saying their prospects were different. Their prospects would make the final decision to join their business based upon … (and this is funny) … FACTS!

So I challenged them about some of the killer facts they had about their business. Here are some of the facts and my comments:

* “We are the 17th largest MLM company in the world.” – Gee, if size mattered, why wouldn’t the prospect join one of the 16 companies larger than you?

* “We are the 37th fastest growing company in the INC 500 list.” – Wow. Why should I take a slow grower like you when I could pick an even faster grower? I’ve got 36 better candidates to choose from.

* “Our product is patented.” – Let’s see. About a few million other products are patented, too. And most patents require an investment of a few hundred dollars to get the paperwork. Not too impressive.

* “We pay out a full 50% in our compensation plan.” – Well, if I should make a decision based upon percentage payout of a compensation plan, then maybe I should join one of the hundreds of programs that pay out more than 50%.

* “We are a 17-year-old debt-free company.” – If length of time was the decision factor, shouldn’t I join a company that is older than yours? And wouldn’t debt-free mean that your accounting department didn’t know how to use leverage to lower its costs? Ouch.

* “Our chief scientist taught at a prestigious medical school.” – This sounds more like, “My scientist can beat up your scientist.” So should I join a company who has a better scientist who got some cool awards, or maybe even a Nobel Prize?

Okay, starting to see a pattern yet? I’m sure you get the point. It is not the facts in our presentation that affect our prospects’ decisions.

Stop using presentations to get prospects to make decisions. Instead, learn the skills of how to close and how to do our business instead of living in some fantasy world where we think that facts make a difference.

As a wise man once said, “Figure it out.”

I get a lot of emails from people asking, “There is a lot to learn in network marketing. 25 skills is a lot. Can you just give me one quick tip so that I will be rich?”

How do you respond to that?

It seems to be a natural tendency for humans to look for shortcuts and instant success. They don’t want to do what it takes to be successful. They only want the rewards.

What if your doctor took that attitude? Not sure I would trust that doctor with my health.

You have to plant seeds and cultivate before you harvest.

Network marketing offers a lot. Social networks, a community, personal development, and a part-time hobby. It can also offer a massive income, but there is an investment of time, money, and energy. 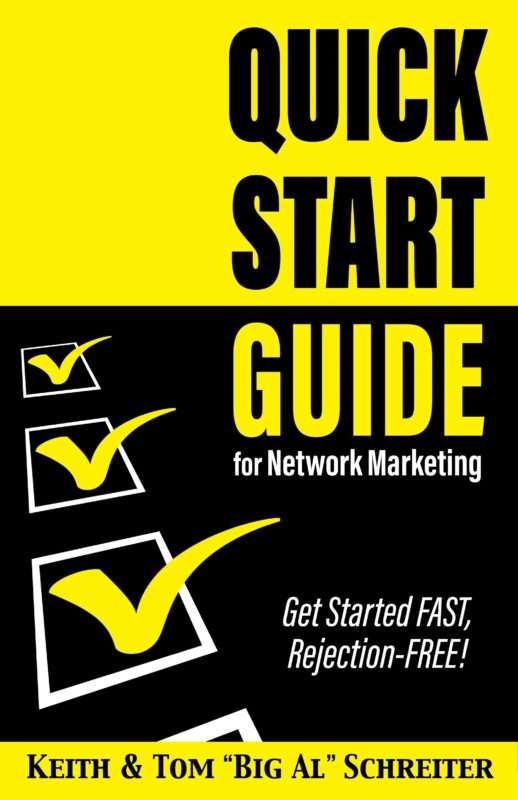