How to get repeat customers for diet products.

In the early 1970s, I was selling vitamins. Nobody wanted vitamins. The idea was too new.

But fortunately we still had fat people back then. Many people wanted to lose weight. I thought, “If I can’t sell vitamins, maybe I can reposition them as diet products?” But the idea of diet products was still too new also. So, I created an alternate plan.

I created my first diet club. Now, this wasn’t an ordinary diet club. I had no budget. I had no location. So here is how I did it.

I asked one of my “larger” vitamin customers if she would like to host a free diet club in her home. She said, “Of course. I have several neighbors that would like to join. We could meet at my house on Tuesday mornings. Sounds like fun.”

I explained how the diet club could help the attendees, but that it would be more of a social event. This made it easy to get six members immediately. People love being social.

For the first meeting, I brought a scale. Everyone weighed in so that we had a starting weight for each member. That took about 15 seconds for each person to weigh in. I explained how we would have a winner each week. Of course, that would be the person who lost the most weight that week.

Next, I would explain how an exercise would look if they decided to try one. This amused them while they drank their coffee and ate cupcakes. Then, we proceeded to eat the treats everyone brought. Easy first session.

The next week, we had the weigh-in. I awarded a “traveling trophy” to the winner who lost almost half a pound. (Some weeks I had to award the trophy to the person who gained the least.) Now, this created competition among the members. They created new ways to cheat almost every week. Some weeks they would wear heavy clothes and big boots so that the following week they could be the winner when they wore only light clothes.

Because this was a “traveling trophy,” I only had to buy one trophy. The trophy was passed on to the new winner each week. But, the ladies got even more creative. Because they were friends, they enjoyed teasing each other. The loser for the week had to put a poster on their refrigerator for the week. The poster was of a rather large person bending over, looking into a refrigerator. Since they were friends, they would go and check the loser’s refrigerator during the week. All in great fun.

Every week I would spend one or two minutes describing an exercise or a tip about proper eating, ate lots of yummy desserts, and took orders for vitamins. Then we would break to try the different desserts everyone brought.

The members appreciated my efforts and rewarded me by purchasing vitamins regularly. Maybe in the back of their minds they thought the vitamins might give them an edge over their friends. So each week I delivered plenty of vitamins at the diet club.

Did anyone lose weight? Not really. They happily told their husbands they were going to a weekly diet club. However, I am sure many of them became healthier by taking vitamins regularly.

This was so easy. Participants loved the weekly meetings and loved the new desserts everyone brought. This diet club became so popular, I was forced to open several more. These were the easiest retail sales I ever made. I showed up with a scale, gave a diet tip, ate lots of yummy desserts, and took retail orders for vitamins. I gained a lot of weight running these diet clubs.

Over time, I learned to say better words at the diet clubs. Better words motivate people to join, and to continue on diet products.

There are two places where words will make a huge difference.

At the time of sale. When we present our products, we could use a technique called “sound bites.” These are short words or phrases that create pictures in our prospects’ minds that will cause them to buy. Here are some examples:

Words that we can use in our conversation BEFORE we do our sales presentation. This is called pre-closing. This could be during our personal story. Some examples:

But, we can get better.

What if we could alter the mindsets of our prospects? Instead of them perceiving us as a salesperson, they perceived us as a problem-solver?

How do we change our prospects’ mindsets? By changing our mindset. Prospects are reactive. The programs in the back of their minds simply react to our current mindset. If we change their mindsets, we will instantly change our results.

You can read the four mindset changes for free.

They are in the free Amazon preview of the latest “Big Al” book. Just click on “Look Inside” on the book image. Enjoy the great ways to get team members to have fun retailing their products and services.

Here is the link: 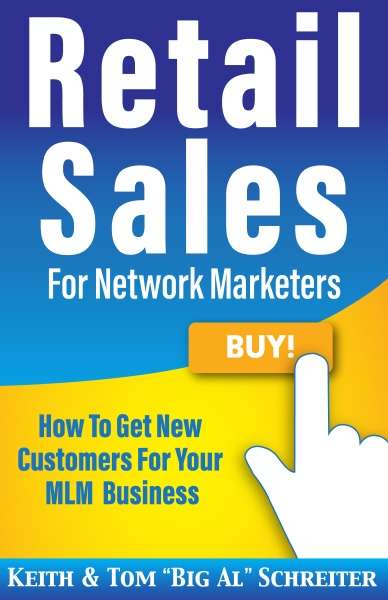 Learn how to position your retail sales so people are happy to buy. Don’t know where to find customers for your products and services? Learn how to market to people who want what you offer.

Get weekly emails with tips, ideas and more magic words to build your business FAST!

One Good Investment Is Worth a Lifetime of Labor.

One Good Investment Is Worth a Lifetime of Labor.

How I sponsored my first leader

How I sponsored my first leader

How to pick out a leader.

How to pick out a leader.

“I need leads. I can’t find good prospects. I exhausted my warm market.”

“I need leads. I can’t find good prospects. I exhausted my warm market.”

Why our prospect worships the ground we walk on and wants to join our business now!

Why our prospect worships the ground we walk on and wants to join our business now!